After moving to this house in 2018, my WhisperRoom seemed a little too large for the room I chose for the studio. I bought a 6′ x 7′ Studiobricks booth earlier this year. It was delivered in 2 large boxes on 11 May. 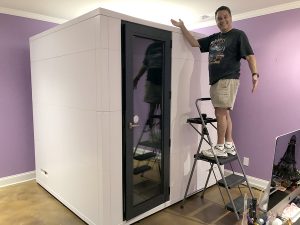 Drew and I had watched several assembly videos of standard booths and looked through the instructions from Studiobricks. We thought we were prepared and that the two of us could easily and quickly put the booth together. After all, we’d built the WhisperRoom at each house and disassembled it twice. In fact, Drew almost single-handedly disassembled it this last time for its sale.

Reader, we were not prepared, in large part because Studiobricks (SB) did not send the correct instructions for my booth! This article will outline things we learned through the trial and error method over several weeks and tips for assembly of custom-size Studiobricks booths.

Before I continue, I do want to say that SB has been extremely responsive to our messages. However, I would have expected that a company that’s been in business for over 10 years would have all their documentation ready and wouldn’t piece-meal it to the customer as they run into problems. If we’d had all the correct guides at the beginning, we could have saved a lot of time and frustration. I do recognize, though, that the company is greatly expanding its US sales and continuously improving its products and service all the time.

1. Get some help to unload the boxes and assemble the booth.

My 6′ x 7′ booth weighed 2500+ pounds when delivered in 2 boxes on wood pallets. The boxes were too tall to go in the garage, so they were left on our driveway. We needed to get the pieces in the garage quickly before rain came that afternoon.

Standard-size SB booths have small panels that one person can lift. This custom, double-walled booth has multiple 6-foot pieces that Drew estimates weighed 100-125 pounds. I was of very little help to Drew in unpacking the boxes into our garage. Thank heaven we have a hand truck!

We hired 2 people from College Hunks Hauling Junk to help Drew move everything from the garage to the lower level of the house and then again on another day to help him assemble the booth.

We paid a total of $703 for their assistance. If we’d done everything on the same day, the overall cost might have been the same. The bill included a 1-time travel charge both times we hired them, but they weren’t here when Drew built the floor.

I note that the safety instructions on page 2 of the 3rd version of instructions below recommend that 3 people assemble the booth due to its weight.

2. Ask Studiobricks for the most current assembly instructions that match your booth (or use my copies below).

They initially sent us the SB Assembling Guide ONE- ONE PLUS -ONE PLUS XXL 2020 (vers. 1). Those booth sizes top out at 4′ x 6′, so most of the blocks pictured did not look like my booth configuration.

On its very first page, the document shows rubber disks that should be attached to the floor panels.

At that point, they sent their SB Assembly Guide CUSTOMIZED Booth (vers. 2), which shows a different approach to building the floor.

Drew installed the booth up to the D level of panels. He wrote to SB with a number of questions. They replied with their SB Assembly Guide Custom Double Wall (vers 3) which is still undergoing English translation but is the most helpful for this booth.

Version 3 does a better job of explaining how to add the vertical and horizontal battens, among other things. We didn’t originally insert the battens as shown on page 9 because they weren’t easy to insert. Once Drew got this third set of instructions, he disassembled the almost-complete booth down to the floor.

However, the battens weren’t the only reason why he needed to start over. A loud floor creak concerned us, and Drew had asked SB about it.

It turns out that we were supposed to add some Silent Blocks under the floor panels where they join per this assembly image that SB sent Drew in response to his question. It would have been very nice if we’d had this picture before he assembled the floor! 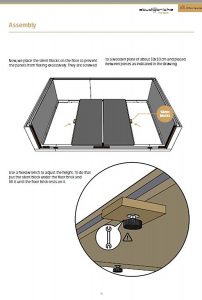 3. In addition to the people who will help you, gather all the tools before you start.

For this installation, you will need:

4. Test any electrical components before building the booth. Plan your installation so that anything plugged into outlets is accessible after you build the booth or will use extension cables, power strips, and/or surge suppressors.

The ventilators shipped with SB booths are designed for 220V electrical systems to go with European systems. They are shipped with power converters to those of us the US.

If you’re in the US, you must set the jumper on the back of the converter for 110-volt input. I’ve seen posts from many narrators who thought their ventilator wasn’t working, only to discover that they had missed this important step!

We found that one of my converters didn’t power the ventilator though it was configured correctly. Unfortunately, we hadn’t tested it before plugging it in to an outlet that was behind one of the walls, well out of our reach.

The company immediately sent us another one, but we had a difficult time pulling the cord out of the outlet since the booth walls were up. We decided to run an extension cord for the new converter around the baseboard to a more accessible outlet. We’ll cover that cable with a conduit and still hide the massive converter on the floor out of sight next to the booth wall.

5. Position all the electrical cables so they are near the cable tunnels before you build the walls.

When you were designing your booth with Studiobricks, you should have planned your space so that the cable pass-throughs are convenient to the electrical outlets on the wall. Since the booth must draw all electricity from the outside, you’ll need to make sure you can string the cables through the ports after the walls are built.

I need to run cables for my mic, headphones, and light from outside the booth. You can see my cables on the floor next to Drew’s stepladder in the picture above. They terminate next to my desk out of view from this picture. Some people also need the cables powering a computer and/or monitor.

Both of my cable ports face studio walls. As you can see when comparing my booth configuration drawings below with the picture above, the electrical outlet on the wall is almost across from the cable port (adjacent to the 2nd ventilator output), making it easily utilized. The other electrical outlet I planned to use is in the middle of the far wall and not reachable from the corner of the booth. 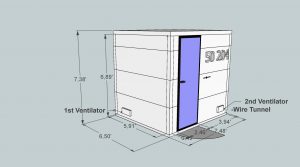 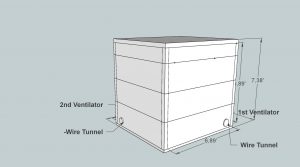 6. Adjust the door screws so that the door easily closes.

The door does not easily close, which I’m assuming is due to the frame not being exactly square. Will this be fixed with a tight roof frame or will I need to make some adjustments to the components of the door that help keep it closed?

SB replied with this document to explain how to adjust the door. They told us in a call that our problem with the door may be unusual because the door sticking could be caused by an unlevel floor.

In my case, the Studiobricks sits on a concrete floor, and Drew was confident the booth was sitting level on it. Drew had used a level when he built the floor frame and after he inserted the floor panels. He also checked the level after adding the A and B panels.

We made the explainer video below to help other people understand the process. You don’t want to move the screws very high as the door could start to bind on the top of the frame.

By the way, Drew discovered that 2 of the hinges were screwed in to the door frame using long metal screws. We couldn’t figure out why SB would be clever and make the hinges adjustable and then not use their creation and permanently attach screws to the frame! We learned in a call that another company makes the doors.

The fix requires removing the long screws and replacing them with the smaller ones that allow the hinges to be moved. He found replacement screws at Lowe’s, which look like this: 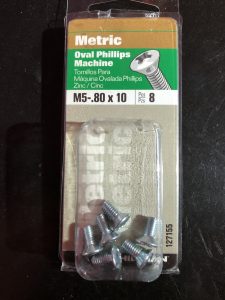 7) Enlarge the bolt hole of the inner handle so that the bolt doesn’t bind on the side.

After inserting the rod into the handles as described in the manual, Drew discovered the connecting rod between the inner and outer handles did not allow the inner handle to match up with the holes drilled for it.

He resolved this issue by using a Dremel to enlarge the left side of the bolt hole (circled in the picture below of a “square peg in a round hole”) with a grinding bit to keep the square rod from touching the side when you turn the outer handle. This change allows the inner handle to line up with the 4 pre-drilled screw holes, enabling you to mount the inner handle securely on the door with all 4 screws. 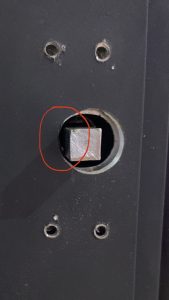 8) Be prepared to add some acoustic foam at the top of the D panels.

Studiobricks affixes acoustic foam to the ceiling of its voiceover booths. I therefore was surprised that my booth does not have foam going to the ceiling. The D-level panels have no foam, leaving the wood in the wall visible and possibly reflective. If you’re placing a order, you should inquire about that foam so that you get what you need.

They offered to send me some extra foam, but I’m going to repurpose my purple Auralex pyramid sheets that I used in my WhisperRoom.

This video shows how the booth was delivered and a time lapse of its assembly.

If you’re assembling a Studiobricks booth, be sure to contact Studiobricks with any questions. Like I said earlier, they are extremely responsive.

If you’d like to have a short (up to 30 minutes), free video chat with Drew, the booth wrangler, send him an email.

I’m excited to have my sleek, new Studiobricks booth and look forward to recording in it for years to come!